…for computers of the future 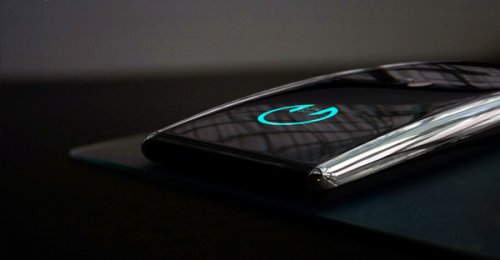 …for computers of the future

Scientists and engineers from the Stanford University designed and produced test patterns of silicon nanodevices that are able, like a prism, to split a ray of light that falls upon them into integral parts and refract this light at a right angle. However, most interestingly, this tiny optical device was completely calculated on a computer with the use of a special algorithm that, in its turn, may be used for calculating many similar devices able to manipulate with light in different ways. Such optical nanodevices can become basic elements of nanophotonic microprocessors for computers of the next generations able to process data faster and more effective than their modern electronic counterparts.

The designed device is a silicon plate with an image on its surface that looks like a well-known UPC code. When a ray of light falls on the device, it is split into two rays with different lengths of waves, which diverge from the direction of the initial ray at a right angle. All this happens similarly to the principle of a prism with yet one difference – the form of the new device bears hardly any resemblance to the form of a classic prism.

The structure of the optical device designed with the help of the program algorithm represents a sequence of silicon stripes and air gaps. In this device, an effect is used that occurs when light passes between two environments with different values of the refracting index. In this case, some part of the light is reflected back, whereas the other part passes further undergoing marginal changes. Moreover, the refracted light interacts with the light that passes in quite a complex way, which leads to the device generally acquiring quite specific and unique optical properties.

On the way out of the splitter device two rays of light are formed, whose wave length equals to 1550 and 1300 nanometers accordingly. The light with such wave length is widely used in fiber-optic technologies, which makes nanodevices, as well as the splitter, compatible with photoelectronic devices that are used in communications equipment.

‘For many years, researchers who work in the field of nanophotonics have been developing elements with simple forms and structure,’ – Professor of Electronics Jelena Vuckovic tells, who has been in charge of this research. ‘Our program has given us a possibility of producing nanophotonic elements of such form and structure that no scientist could think of – even the one having profound knowledge and experience in this field, and mastering even the very subtleties of all the processes that take place.’

With the help of their algorithm, the scientists have calculated the structure of one more nanophotonic optical element, whose structure resembles cheese filled with many cavities connected to each other. This device is theoretically supposed to route the ray of light directing it by certain trajectories depending on the state of several other ‘leading’ light rays that enter the device in set spots. Unfortunately, however, the equipment that is now at the scientists’ disposal does not allow to produce such an element precisely enough and try out its work.

‘Light can transfer much more data than electric current that travels in conductors. Apart from that, transference of photons needs less energy than that of electrons,’ – Jelena Vuckovic claims. ‘Unfortunately, current nanoindustry technologies do not yet allow us to put into practice all the possibilities provided by the algorithms that we developed. However, when such technologies become available, we will be ready to embrace this moment fully and immediately start developing and creating relatively simple nanophotonic communication devices and more complex processors aimed at computers of future generations.’