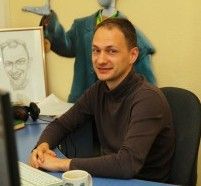 1. Why game design and why Win Interactive?

I have been into games since I was 6. And what kind of player wouldn’t like to create games? In my 1st year of the university I participated in creating the Lineage 2 game server and tried to modify the game, to add scenarios, dialogues, quests, etc. I ended up at Win Interactive thanks to a friend who had already been working here. I get a chance to do what I love, and turn my hobby into career. Moreover, I get paid for it!

3. What does GAME mean to you?

Game is a transition to another world. Do you want to build up your own economic empire? There you go. Want to play ‘Die Hard’ – go for it! A quality game enables dreams to come true.

4. There is nothing more boring than… Perhaps the most boring thing for me is fixing server files after re-balancing of game economics has been performed. That’s the routine. However, I’ve come through it)

It’s never too late to start dreaming and thinking ‘out of the box’. 6. If you were able to write to the 16-year-old yourself, what would you say?

Well… I would recommend myself to go to the university I wanted to go, not my parents. And not to do stupid things. I’ve done enough.

7. What would you recommend people willing to become game designers?

Dreaming and playing games. Imagination is a recipe for success.